The Internet of Things Needs the Cloud 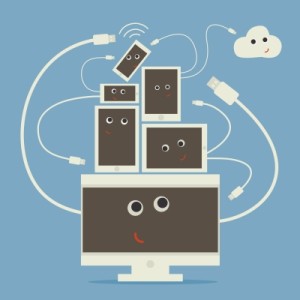 Experts are playing the name game.

There’s Cisco’s Internet of Everything, IBM’s Smarter Planet, MIT’s Ubiquitous Computing, and The Economist’s The Thingternet. You may even hear it referred to as  “Machine-to Machine (M2M)” or “Device-to-Device (D2D) Communications.”

Call it by any other name, but the Internet of Things (IOT) is simply a massively interconnected network of people, processes, machines, and things made possible through the Cloud. Cisco has created a methodological connections counter to track how the IOT components are being connected each day. Its network engineers calculate the economic value of IOT to be $19 trillion.

International Data Corporation (IDC) likewise forecasts billions of things to be connected and trillions of dollars in economic development in its study on IOT spanning the period 2013-2020. This just goes to show the immensity of IOT and how it will impact the future IT world and people’s lives.

The Internet of Things is all around us

IOT is not limited to computers and mobile devices like smartphones, tablets, and iPads. It includes just about anything that can be installed with a sensor.

IOT can be found at home. There are home thermostats that sense when people are home or not and adjust accordingly for comfort and cost savings. For an example of kitchen-related IOT, Electrolux is in the final stages of developing an intelligent refrigerator that comes complete with a microphone, speakers, and video camera. Its computer can suggest groceries needed and places to buy them, as well as meal recipes based on ingredients available in the refrigerator.

We can also see IOT when we travel, as new cars include  about 50 or more computers. With navigation tools, virtual maps, performance indicators, automated gauges, timely alarms, and more, travelers can be assured of safer trips and smoother traffic flow.

Then there’s Wal-Mart’s famous RFID tag that monitors their global supply chain and ensures products reach their destinations at the right places at the right time. Coca-Cola’s interactive vending machines, which are projected to reach two million in a few years. And UPS connects thousands of delivery trucks to the Internet to make delivery faster.

IT scientists foresee that many more ordinary things will become intelligent as the Internet of Things gains steam. For instance, sensors can be scattered all over rainforests to prevent illegal logging. Sensors can also protect fruits, vegetables, and other produce from spoilage. They can keep farm animals from getting sick, and rivers from being contaminated.

The Internet of Things is limitless.

The Cloud is behind the Internet of Things

What makes the interconnectivity of things possible is a network of Cloud-based systems. Many companies simply don’t have the capability to provide a fail-safe network to support their IOT. The abundance of the Cloud has all it takes to support the high requirements.

IOT is not just about connecting things but looking for a Cloud-based service that can support an immensely interconnected ecosystem capable of enabling all the connected things. SDN, virtual network overlays, network service virtualization, borderless admission control, and security are critical options that need to be considered.